Not too bad of a film.

After the Vietnam War a has been monster hunter named Bill Randa (John Goodman) covinces the US Government to sponser and fund a trip to an uncharted island in the South Pacific.

He claims it's a research project, and before you know it there is an expedition headed to "Skull Island". Randa is secretly hoping to find proof that a huge monster lives there.

Samuel L. Jackson is Preston Packard, who is leading a bunch of military men on the same trip. After arriving at the island a fleet of helicopters takes off and flies thru the clouds that always surrond the island. Much to their surprise a huge ape batters most of them out of the sky like toys.

This sets up a battle for survival between the men and the monsters that inhabit the island. There are weird flesh eating birds, giant spiders and much more.

Packard has a private war going with Kong who killed so many of his men, and he becomes almost careless doing so.

This was not a bad film at all. I went into it thinking I would be disappointed, but it was quite a surprise that I was really involved with it. All of the performances are very good,

The rest iof the cast includes Brie Larson, Tom Hiddleston, Caorey Hawkins and John C. Reilly. If you haven't seen this yet, take a peek and see what you think. 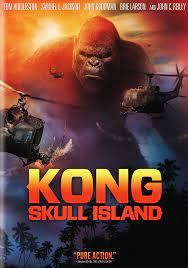 Posted by quatermass at Saturday, January 22, 2022