Jimmy Sangster directed this classic vampire tale set in 1830. It has been about 40 years since the evil Karnstein family spread terror across the land and now they are back.

A young woman arrives at a girls finishing school. Her name is Mircalla (Yutte Stensgaard) and she immediately grabs the attention of a teacher named Giles Barton (Ralph Bates).

Barton has been doing research on the Karnstein legend and he discovers that Mircalla is actually Carmilla Karstein. One night he follows her back to the castle and pleads for her to make him one of the undead so he can serve her forever. This however, does not go as he planned it to and Giles is killed.

Another teacher, Richard Lestrange (Michael Johnson) also falls for Mircalla and refuses to believe she is anything but a very beautiful woman. This leads to all kinds of problems as girls end up missing or killed and the school tries to cover it up.

There is a lot going on in this film and it holds ones attention for the entire running time. I love this film and there are plenty of beautiful young women on display here, but the standout is, of course, Yutte Stensgaard. I don't think I have ever seen a more beautiful vampire in all of the films I have watched.

If you like Hammer horror, this is a MUST see. The rest of the cast includes Suzanna Leigh, Mike Raven, Barbara Jefford, Helen Cristie and Pippa Steele. 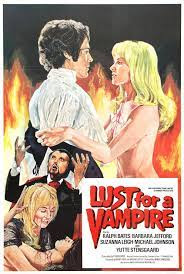 The stunning actress of "Bachelor Party" and a few Whitesnake videos has died.

Kitaen made herself known worl wide in the 1984 movie "Gwendoline" and there was no looking back. After her stunning beauty was recognized by fabs worldwide she starred in "Bachelor Party" as Tom Hanks girlfriend and then moved on the a music video for the hard rock group Ratt.

In 1986 she starred in the classic Kevin Tenny film "Witchboard" and horror fans discovered the red heaird beauty. She went on to appear in three videos for the group Whitesnake and became a rock music icon.

She kept working thru 2019 and she had several run ins with the law for drug possession and alcohol abuse. These demons finall took their toll. She passed away on May 7th, 2021 at the young age of 59. 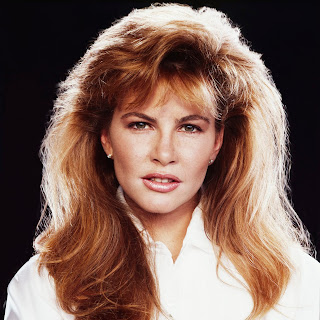 This was the 64th of 66 Hopalong movies. It's also one of the most entertaining.

A school teacher, Lola Blair (Mitzie Uehlien) is against a saloon openng right next to the school and she fights back as best she can.

However, the saloon owner Steve Mawson (John Parrish) is tired of her antics as well as those of another saloon owner in town. Hopalong (William Boyd), California (Andy Clyde) and Lucky (Rand Brooks) try and solve the problem.

Before they get too far Lola is kidnapped and it's up to Hoppy and his friends to find her.

This is a fine entry that moves along quickly and has a nice twist at the end. Good clean fun and adventure which is sadly not the case with movies anymore. 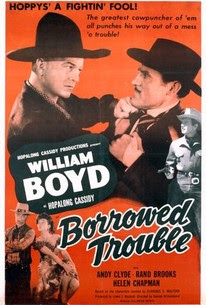 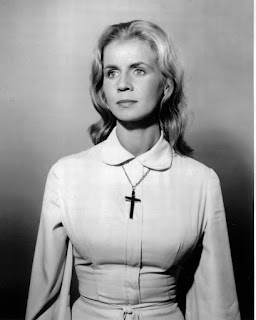 As you probably know by now I am giving a look at many, many Hopalong Cassidy movies.

This is a top notch entry in the series. A man named Ben Pendelton (Britt Wood) discovers a huge gold strike and is set upon and killed by outlaws that want the mine for themselves.

Ben dies and the mine location is unknown. A relative, Trudy Pendleton (Elenor Stewart) comes to claim the mine. Hoppy (William Boyd), Lucky (Russell Hayden) and California (Andy Clyde) come to town as well since California is also a very distant relative.

Hopalong tries to help Trudy but is constantly interrupted by Ace Gibson (Morris Ankrum). Gibson is the man behind the killing of Ben and he works his way into a friendship with Trudy in order to get the mine.

Cassidy and his friends try and solve the mystery of the mines location as well as stop Ace from swindling Trudy.

This is a fast paced entry and director Lesley Selander knows the material well. Any Hoppy fan will like this film. One of the best. 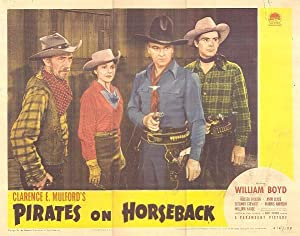 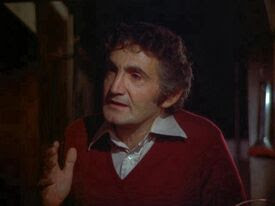 It's been way too long since I caught this one.

This is a great Hammer film starring Peter Cushing as a botanist named Rollason who is working in the Himalayan mountains with his wife Helen (Maureen Connell).

He teams with a crass business man named Tom Friend (Forrest Tucker) and they form an expidition to find the Yeti. After a long mountain climb Rollason learns that Friend is only interested in money and pulling a fast one on the public by capturing a monkey and claiming to be to a yeti offspring.

However, things take a turn when they encounter a real yeti and one of the party named Ed Shelley (Robert Brown) kills one. Friend and Shelley dream of the money they will make while Rollason tires to stop them.

The Yeti come looking for their dead comrad and that is when the fun really begins. This is a well written film by Nigel Kneal and plays on the fears on men really well while at the same time having total sympathy for the Yeti, which is a race of non-violent creatures that want nothing to do with humans.

All of the performances are all very good and the stark photography of a desolate place really works well. This is a highly recommended film for horror fans. 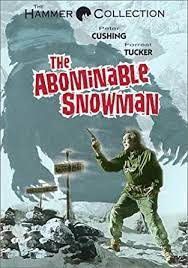 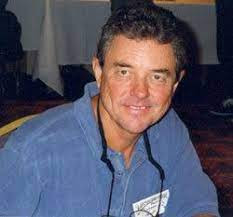 The actor, who as a child, portrayed Mark McCain on the Rifleman has died.

John Crawford started his acting career in 1956 and went on to make himself quite a name.

He appeared in several genre films such as "The Space Children" and "Village Of The Giants", but he is best known as Mark of the Rifleman. That series ran from 1958-1963.

Crawford was also an accomplished musician abd appeared at various conventions around the country. He passed away from complications due to Alzheimer's on April 29th, 2021 at the age of 75.

He will always be a part of the childhood of people my age and it is sad to see another one go. 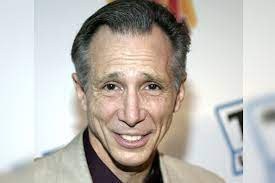 I reviewed this film many years ago and I figured I do it again because Sinister Cinema has issued and beautiful anamorphic widescreen print of it.

Massimo Pupillo directed this wild and bizarre film starring Mickey Hargitay as Travis Anderson, an ex-actor who has retreated from civilazation because he hates people.

His castle is "invaded" by a troupe of models and cameramen who want to use the castle as a setting for their lurid paperback photos. Anderson at first says no, but when he spots a young woman named Edith (Luisa Baratto) whom he knows from his previous life he agrees to let them stay one night.

Things start to happen right away. A couple of the models are killed and it soon becomes apparent that the spirit of the castles former owner "The Crimson Executioner" has returned.

Yes indeed, Travis assumes the role of the Executioner and being to go mad. He imprisons two female models, Suzy (Barbara Nelli) and Annie (Femi Benussi) and the manager in the dungeon.

Travis proceeds to torture the women with sharp swords, water torture, the stretching rack and more. One model, Kinojo (Moa Tahi) is killed in a bizarre spider web-like contraption.

Will anyone survive the sadistic Travis and his torture chamber? The colors in this print are deep and beautiful and the print is damn near perfect, even if it is the US version that runs 74 minutes.

I can't recommend this enough because it's a personal favorite. I love this film so much I bought an original poster and lobby card set as well as 8X10 stills and the very rare Italian picture book based on the film. And, yes Femi Benussi looks fantastic as always. 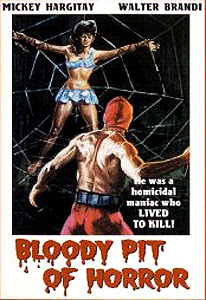 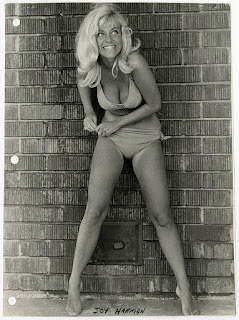 Hoppy suspects that it's actually Colby himself setting up the robberies. When a friend of Hoppy's named Speedy (Britt Wood) strikes gold Hoppy borrows it and sets up a trap for the mysterious criminals.

He announces another gold shipment is coming thru and this sets up a rather great climax.

Lesley Selander directed and the rest of the great cast includes Ruth Rogers, Roy Barcroft and Eddie Dean. This is a fun and fast pace little film from Paramount. A must for B western fans. 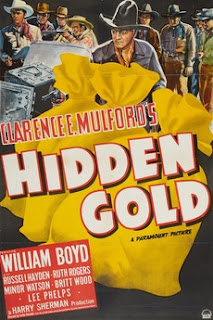 One of the most unique films ever made.

Albert Dekker stars as a scientist who has discovered radiation that can shrink people. He sends for a few scientists to verify his findings and after a 10,000 mile trip he dismisses them in a matter of minutes after they have served their purpose.

This doesn't sit well with any of them and they refuse to leave. Dr. Thorkel tricks the party, including his servant Pedro, into strpping into a room and them locks them in. He uses his invention and shrinks them to one fifth their original height.

Thorkel keeps the around as it is impossible for them to escape, and he likes making their lives miserable. He discovers that they are again starting to grow and figures he has to kill them.

This is a beautiful Technicolor film made even better by the 4k update from Kino. I had been waiting to see this for a while and then with so much going on I simply forgot it was released.

A few weeks ago my wife and I were on a small buying trip and she discovered this in a store and she brought it over and said' You interested?" My jaw hit the floor. Ginger had found a gem hidden in the back of a shelf.

I highly recommend this sci-fi gem from 1940. It's unique, fun and has some great special effects for the time. The rest of the cast includes Janie Logan, Thomas Culley, Charles Halton and Victor Kilian. 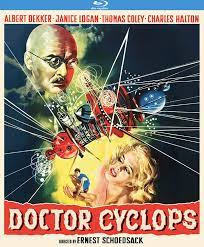 Posted by quatermass at Thursday, April 29, 2021 No comments: 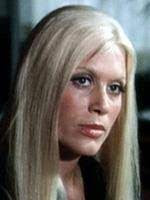 Posted by quatermass at Thursday, April 29, 2021 No comments:

A great entry in the Hopalong Cassidy series.

As I watched this film I couldn't help but see the 2020 election.

Hoppy (William Boyd) is a sheriff in a small western town and he's up for re-election. Into town rides Tad Hammond (Douglass Dumbbrille) whom Hoppy had arrested and had jailed. He's now out on parole.

Hammond gets all of the badmen Hoppy has run out of town and has them band together to stop farmers from voting so they can stuff the ballot box with votes for a gutless wonder named Jerry Doyle (Kirk Alyn).

They actually manage to throw the election so Hoppy, along with California Carlson (Andy Clyde) and Jimmy Rogers, plan to report the crooked election to the Governor. Helping them is a young woman named Kathryn reynolds (Louise Currie).

Everything comes to a head when Hoppy battles Tad on a swinging bridge. This scene alone is worth the price of admission. It's very well handled and quite shocking for a Hopalong Cassidy film. 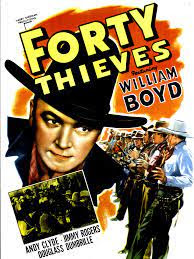 Posted by quatermass at Wednesday, April 28, 2021 No comments: 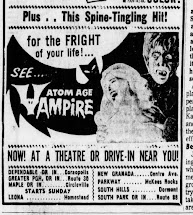