I don't know if there is anyone I know that hasn't seen this show at one point or another.

The show ran for 3 years on CBS and was a huge hit. Over the years it was syndicated on TV continuously and I think I have seen every episode hundreds of times. I love this show, and it was a huge part of my childhood. It starred Bob Denver as Gilligan, Alan Hale as The Skipper, Jim Backus as Mr. Howell, Natalie Schafer as Mrs. Howell, Tina Louise as Ginger, Dawn Wells as Mary Ann and Russell Johnson as The Professor.

TWO ON A RAFT 9/26/64...The pilot episode finds the SS Minnow wrecked on a deserted island so the Skipper (Alan Hale) and Gilligan (Bob Denver) decide to take a raft and get help. The shark attack scene is a classic!

HOME SWEET HUT 10/3/64...The castaways decide to build their own huts instead of a communal one. Will they be hurricane and Gilligan proof?

VOODOO SOMETHING TO ME...10/10/64...The Skipper is convinced that Gilligan has been turned into a chimp via a voodoo curse.

GOODNIGHT SWEET SKIPPER 10/17/64...The Skipper dreams about fixing the transmitter, but cannot remember what he dreamed. The Professor (Russell Johnson) tries to induce sleep so rescue might be at hand.

WRONGWAY FELDMAN 10/24/64... The Castaways discover a once famous pilot named "Wrong Way" Feldman (Hans Conried) is on the island and might provide their rescue.

PRESIDENT GILLIGAN 10/31/64...Gilligan is voted president of the island but nobody listens to him anyway.

THE SOUND OF QUACKING 11/7/64...A duck discovered by the castaways is used as a way of carrying a message back for rescue. When that fails they decide the duck might make a good meal.

GOODBYE ISLAND 11/21/64...Gilligan discovers a tree sap that might be able to hold the SS Minnow together and enable the castaways to sail away.

THE BIG GOLD STRIKE 11/28/654...Mr. Howell (Jim Backus) and Gilligan (Bob Denver) discover a huge gold mine and Howell wants to keep it a secret.

WAITING FOR WATUBI 12/5/64...This is one of my all time favorite episodes. The Skipper (Alan Hale) believes he is cursed by an ancient Tiki God, and the only one that can save him is Watubi, and ancient south seas island God.

BIRDS GOTTA FLY, FISH GOTTA TALK 12/19/64...After reports of a possible rescue turn out to be false, the castaways holiday spirit is brought down.

THREE MILLION DOLLARS MORE OR LESS 12/26/64... A small bet between Gilligan and Howell turns into a 3 million dollar gain for Gilligan.

WATER WATER EVERYWHERE 1/2/65... With their fresh water supply dwindling, the castaway must look for a new supply...but where?

SO SORRY, MY ISLAND NOW 1/9/65...A Japanese sailor (Vito Scotti) captures the castaways because he thinks WW2 is still being fought.

PLANT YOU NOW, DIG YOU LATER 1/16/65...The castaways have a court hearing to determine who owns a treasure chest Gilligan found while digging a pit for Mr. Howell.

X MARKS THE SPOT 1/30/65... An unarmed US warhead lands on the island and the castaways think their days are numbered.

GILLIGAN MEETS JUNGLE BOT 2/6/65... A jungle boy (Kurt Russell) is discovered to be living on the island.

ST. GILLIGAN AND THE DRAGON 2/13/65... The men and women have an argument and decide to live in separate camps, but when a scary monster appears, they discover how much they really need one another.

BIG MAN ON A LITTLE STICK 2/20/65...A surfer (Denny Miller) lands on the island after riding a freak tsunami wave.

DIAMONDS ARE AN APES BEST FRIEND 2/27/65... A gorilla kidnaps Mrs. Howell (Natalie Schaefer) after also stealing some of her jewelry. How to rescue her?

HOW TO BE A HERO 3/6/65... The castaways attempt to make a depressed Gilligan a hero.

THE RETURN OF WRONG WAY FELDMAN 3/13/65... The pilot returns and decides to stay on the island forever. The castaways have other plans however.

MUSIC HATH CHARMS 3/27/65...The castaways form a symphonic group and the music attracts headhunters to the island who believe the music to be war drums.

NEW NEIGHBOR SAM 4/3/65...A parrot tells the castaways about missing jewels and a boat. Now they have to find them.

THEY'RE OFF AND RUNNING 4/10/65...The Skipper loses everything including Gilligan in turtle racing against Mr. Howell.

THREE TO GET READY 4/17/65...Gilligan finds a magic stone that grants it's owner 3 wishes. Will this finally be the rescue the castaways have been waiting for?

FORGET ME NOT...The Professor (Russell Johnson) hypnotizes the Skipper to cure amnesia, but the skipper comes to believe they are all Japanese soldiers.

DIOGENES WONT YOU PLEASE GO HOME 5/1/65...The castaways begin writing their diaries about their adventures on the island.

PHYSICAL FATNESS 5/8/65...The Professor creates a glowing dye that might get the group rescued which means the Skipper will have to lose weight if he wants to rejoin the Navy.

GOODBYE OLD PAIN 5/22/65...Harold J. Stone stars as Dubov, an artist who is also on the island. He refuses to leave since he hates people and the castaways decide to make his life miserable so he will get them rescued.

MY FAIR GILLIGAN 6/5/65...Gilligan saves the life of Mrs. Howell and Mr.Howell decides to adopt him as their son.

A NOSE BY ANY OTHER NAME 6/12/65...Gilligan gets a swollen nose from a fall and has a lot of trouble believing that it will go away soon. This was the final episode of season 1. 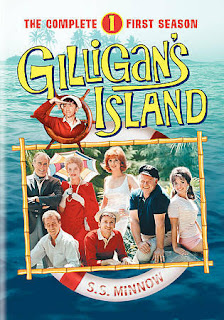