One of my favorite films.

I first saw this on a Halloween night on HBO when the network first started way back in the late 80's. It really impressed me, and it still does today after all these years.

Richard Crenna is a doctor who rents an old house to turn into a clinic. it turns out the house in haunted by a very evil spirit and soon it has the doc and all of the people who were helping him trapped in the house and is killing them one by one.

The doctor himself is responsible for unleashing the evil when he removes a cross from an ancient tomb in the basement. The scares are pretty good and some of the deaths are disturbing, especially Andrew Prine sinking into the ground after it becomes quicksand.

There is also the scene involving lovely Lynne Moody as a woman who gets sexually attacked by the invisible demon.

The ancient burial tomb is actually a portal to hell and Crenna and his sexy wife, played by Joanna Pettet find this out when they venture down. Victor Buono is the Devil. This is the part of the film that most people don't understand, as it really seems tacked on. It isn't a problem for me.

Shout Factory put this out on a double bill with Twice Dead on their Roger Corman cult classics. I recommend this film if you like good ghost stories. 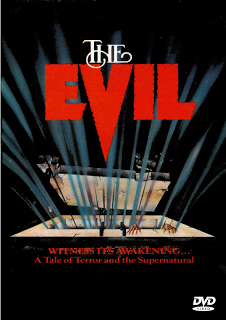 Posted by quatermass at Wednesday, August 27, 2014