Sterling Hayden stars as Johnny Clay, a small time hood who has just been released from jail and is now looking to make a huge heist at a race track.

He hires several people he knows and trusts and the wheels are set in motion for one of the greatest crime films ever made.

The stylistic story telling a first in film as it recounts every single incident leading up to and including the heist. The cast is full of great actors including Colleen Gray, Jay C. Flippen, Vince Edwards, Ted de Corsia, Marie Windsor, Elisha Cook Jr., Joe Sawyer and Timothy Carey in an unforgettable role.

This has one of the most downbeat endings to any film I have ever seen. I really love this film and cannot say enough good things about it. I have just the standard MGM version, but thias is out from Criterion as well it should be. If you haven't seen this film yet, do so soon and watch how films should be made. 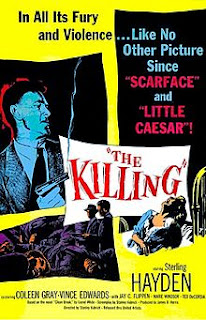