After six murders of young women, a police inspector named Frank Dorin (Adrian Hoven) is called in to investigate. He doesn't get a lot of help but does find out that the entire village is in a grip of fear.

Every time a killing takes place, the power goes out in the entire town. Frank seeks the help of a scientist named Von Adelsberg (Wolfgang Preiss) and at the castle is where he meets the lovely Maria (Erika Remberg) who just happens to be the scientists daughter.

As the investigation proceeds, Frank discovers huge caves beneath the small town and the sinister secrets they carry. The vampires are pretty cool looking females and Frank seems to be very outnumbered.

This is a unique film in that is takes the vampire legend in several new directions including the power outage angle. Very odd indeed. Hoven does a great job as the inspector and it's always good to see Remberg in anything.

This is also known as "Night Of The Vampires" but Richard Gordon retitled it and put it on a double feature with "Tomb Of Torture".

It's not too bad of a film and I think horror fans would generally like it. The stark black and white photography lends a great atmosphere to the film. It used to play on the USA network as part of "Commander USA's Groovy Movies" but I never got a chance to see it until a few days ago.

I enjoyed it and hope you will too if you haven't seen it. 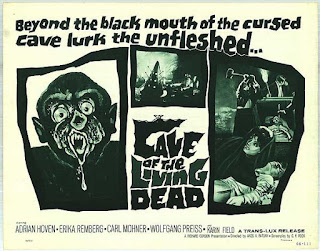 Posted by quatermass at Wednesday, December 02, 2020