One of the best Bomba films and what a great cast!!

Bomba (Johnny Sheffield) is contacted to help look for a couple of evil diamond smugglers.

Bomba is called on by Andy Barnes (Leonard Mudie) to help find three missing men, one is named Gatsby and the others are Greg (Arthur Space) and Hardy (Lane Bradford).

Bomba discovers the body of Gatsby and soon he hooks up with an incredibly sexy woman named Lita Sebastian (Laurette Luez) who is also searching for her missing father.

It turns out that Greg and Hardy are using her father and many natives as slaves in order to get millions of dollars worth of diamonds out of a mine. Bomba attempts to put a stop to this, which he does.

A great Saturday afternoon film, this film really moves, and the cast helps a lot. Also in the cast is Lyle Talbot as a baddie named Roy DeHaven. I believe I have said this ion other reviews, but Laurette Luez is a stunner who I watch in everything she does.

I like this film a lot and cannot recommend it enough. If you only see one Bomba film, make it this one. 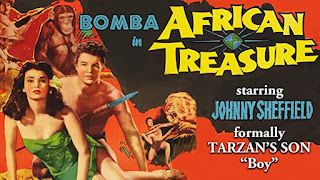