Not too bad of a mystery.

This little indie film noir moves along at a great pace and really delivers the goods.

Dean Jagger stars as US Treasury Agent Cliff Holden. When another agent is murdered and it turns out to be a childhood friend of Holden, he is placed onto the case.

Holden discovers a jewelry smuggling ring and decides to tail the leader, Matty Royal (Rene Paul) all the way to Europe. On the return he meets a woman named Kathe Van Bourne (Lottie Elwen) who suddenly falls ill and upon landing a mysterious ambulance takes her away.

While talking to her on the plane, Holden notices she is wearing a priceless necklace. Holden concludes that the illness and ambulance are somehow connected to the jewelry smuggling ring.

This is a tight little film that moves along very well and should not disappoint film noir fans. It' was way ahead of it's time in 1949, and it holds up very well today.

The rest of the cast includes John Carradine, Harry Landers, Walter Vaughn and Edith Atwater. Find this and check it out, you won't regret it. One of the best of it's kind. 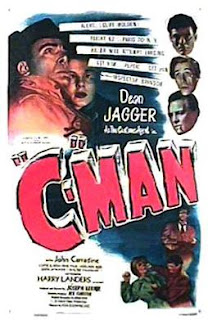