Albert Lewin directed this bizarre film that has slipped into obscurity. Ava Gardner stars as Pandora, a very beautiful woman that men would kill to have, but she has never fallen in love with anyone. She lives in a small Spanish seaport town called Esperanza.

One day she notices a small yacht with a man on board. When they meet she discovers that his name is Hendrik van der Zee (James Mason). Pandora feels drawn towards him, like no other man she has ever met.

He is actually the "Flying Dutchman", a man cursed by God to wander for eternity unless he can find a woman who would die for him. They become romantically involved and everyone notices how Pandora is almost obsessed.

This is a beautifully shot film that looks very different from most films. I can;t really describe it however. It's is part fantasy, part romance and entertaining all at once.

This is a film that doesn't fit into and category. When it came out in 1951 it was a disaster, but it is a love story that really works. It's about 120 minutes and if you watch it you must be patient.

The Blu-ray looks very good and I have to admit I enjoyed the film, but it isn't for everyone. The rest of the cast includes Nigel Patrick, Sheila Sims, Pamela Mason and Abraham Sofaer.

Go ahead and check it out, if you wish. 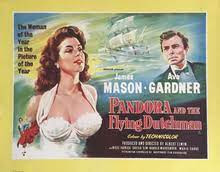