This was available on VHS back in the day and I made a bootleg copy to DVD and I have been happy with that one, but I just couldn't resist this when Shout said they were going to release it.

Ed Nelson stars as a scientist who is investigating a strange cone shaped object to suddenly appears in an Illinois town called Riverdale. People in the town start disappearing and then coming back acting strange.

Nelson's character of Dr. Paul Kettering discovers that parasitic creatures from beneath the Earth are responsible for the change in people. These little monsters are intent on taking over the entire planet.

Director Bruno Ve Sota handles ther film very well and in it's brief running time of 60 minutes, the film never fails to entertain. It's based on Robert Heinlein's novel "The Puppet Masters".

Heinlein sued because the film was based on his work without his permission and AIP settled the suit out of court. The rest of the cast includes Joanna Lee, Alan Frost, Jack Hill, Jody Fair, Robert Ball and Leonard Nimoy.

It's a great little film that I love a hell of a lot and it's recommended for any 50's sci-fi fan. The presentation from Shput is beautiful and no, there are no extras, but who cares. 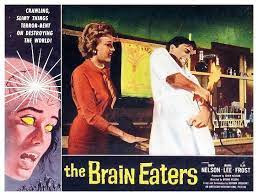