Tubi has included a number of films in the Bomba series, and I really like these simple little films.

These are very easy to follow films that are always good for early morning viewing. In this outing, Bomba (Johnny Sheffield) is called on to help a couple built a scientific agricultural center.

Holding Judy Maitland (Allene Roberts) and her brother Robert (Harry Lewis) behind is a killer black panther that is on the loose in the jungle. The local wormen think that the panther spirit lives in the body of a young woman named Losana (Lita Baron) who just happens to be the Maitland's housekeeper.

After numerous attempts to kill the panther fail, Robert decides to set a controlled fire to flush the beast out even though Bomba has warned him of the dangers of such an action.

The fire almost gets out of control and spells disaster and this leads to Bomba fighting the panther and killing it.

As I said, these are pretty straight forward movies that really take me back to a simpler time in my life, and for me they are a good escape from all the crap going on in the real world.

Lita Baron is exotic looking as ever and I got into the movie very easily. For escapist entertainment this can't be beat. 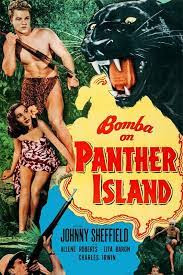