This has always been a favorite of mine.

By no means an original film, but it's a dandy. By the way, this film was called "Indecent" of the floor of the US Senate by Jesse Helms....lol, my God they don't have anything better to do.

Zed has a couple of robots who do his bidding and a couple of guests. One is a woman named Shala (Brinke Stevens) and the other is her brother. Tisa and Daria sense something is wrong, but can't quite figure it out.

Zed makes it clear after a short while that he enjoys hunting humans for sport and he intends to hunt the women down. If they live the night they win their freedom.

Yep, you guessed it, this is a remake of the "Most Dangerous Game". What this film has going for it is three very beautiful women in the leads. Cindy Beal and Brinke Stevens are very nice to look at, of course, but my fave is Elizabeth Kaitan. My God does she look good in her bikini!!

It's a fun film and one that I would recommend for a fun time killer. 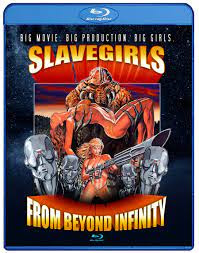