This is a film version of the novel "To Have and Have Not" by Ernest Hemingway.

Audie Murphy stars as Sam Martin, a down on his luck charter boat skipper who is rapidly falling behind on his bills.

His first mate is a drunk named Harvey (Everett Sloane) and his only goal in life is to get another drink, but Sam keeps him on out of friendship. One day at a gambling house Sam meets a man named Hanagan (Eddie Albert) who hires Sam to take him fishing.

Hanagan brings along his gorgeous friend Eva (Gita Hall) who tries to make a play for Sam. Sam is happily married to Lucy (Patricia Owens) and so he resists her advances. As night falls, Hanagan convinces Sam to take him to Havana Cuba. Since this is in the early days of the Cuban revolution it's a dangerous place to go.

Unknown to Sam is that Hanagan is making gun deals with the revolutionaries and because Sam owes so much money he agrees to go along with it, especially after Hanagan buys his boat note from Sy Phillips (Paul Birch).

This is a very low budget drama and yet it works very well. The cast is top notch and the films moves along at a great pace. It's interesting to see Albert in the role of a cold blooded arms dealer and killer.

The standout in this film is Gita Hall, a beautiful Swedish woman whose film career consisted on only 2 movies, this and "Wolf Larson" in 1958. She is a stunner and the camera loves her. It's a shame she didn't make more films. Don Siegel directed this film with a lot of flair.

The rest of the cast includes Jack Elam, Richard Jaeckel, and Jack Daly. This is a very good adventure film and one that you might want to check out. The Blu-ray is a wonderful presentation. 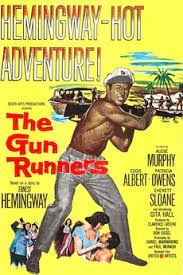