This is a film noir, and I have to admit I was a little disappointed in it.

He is investigating a series of murders and stumbles onto an extremist group called "The Crusaders". A reporter looking into the group has also been killed.

During his investigation, Mallory meets Angelo Agostini (Marc Lawrence) who may be the head of the organization and a beautiful nightculb singer named Barbara Whitfield (Jean Wallace).

Mallory suspects everyone and widdles down the list to either Agostini or Whitfield. When Barbara is killed, it becomes very clear who the leader of this group is.

The movie is only 72 minutes long, but it did seem to drag quite a bit. The acting is bland except for the gorgeous Jean Wallace, who is a knockout from the first time you see her.

This wasn't much of a film noir, but it did kill some time and again, Wallace made the film watchable. I can take this or leave it. 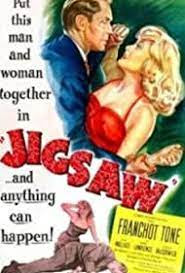