A rare film finally gets it's due on this beautiful Blu-ray.

The final film of director Albert Lewin is a bizarre adventure, romance and horror film all wrapped up into one. This was filmed at Churubusco Azteca studios it's interesting to note that the great Mexican director Rene Cardona is listed as assistant director.

Steve Forrest stars as Terry Matthews, a man who is soon to marry a young woman named Juanita (Liliane Montevecchi). Juanita's father is investigating an archaeological digging that discovers a jaguar idol in an Aztec temple.

After her father is killed in an accident, Juanita goes into a depression and Terry thinks marriage is the answer. However, her guardian, Dr. Albert Stoner (James Robertson Justice) believes that the jaguar god has stolen her soul.

He actually befriends a jaguar believing that it is the one who has her soul. Things get really weird from here and it seems like a cross mixing of several Val Lewton films.

The beautiful widescreen print is also in gorgeous color and has a very different look to it. It's hard to describe, but if you've seen this you know what I mean.

For many years the only thing I had ever seen associated with this film was a lobby card which I still own. It's a lush and wonderful adventure tale that has been lost for way too long, and it seems that I have come across nothing but negative comments about it.

It's available from Kino with another Lewin film called "Pandora And The Flying Dutchman" which I will be adding here soon. I really think you should see this film. It's just too rare to miss and, well, it damned good. 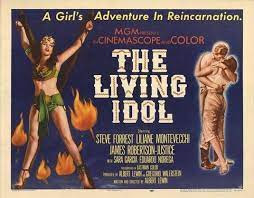