All of the Bomba films I have talked about over the last few days are all directed by Ford Bebee, and this is no exception.

In this fun little programmer from Monogram, Bomba (Johnny Sheffield) must help a young boy out of danger.

Paul Gordon (Donald Woods) and his wife Ruth (Majorie Lord) live in the jungle with their young son, David (Tommy Ivo). Paul returns home after all of the animals he has collected in the jungle have been let out of their cages and the natives have told him it was the work of a jugle boy named Bomba.

Paul refuses to believe this, but lets it go. Meanwhile a Dr. Charles Langly (Grandon Rhodes) comes to ask if Paul is interested in taking himself and his two guides, Fred Barton (John Ridgely) and Fred Higgins (Don Harvey) to a fabled treasure at the base of a volcano.

Paul refuses and so the two Freds decide to kidnap David since he knows where the mine is, thanks to his friendship with Bomba. They also kidnap Nona (Elena Verdugo) who is David's friend and his parents housekeeper.

Bomba accompanies Paul, Ruth and Dr. Langly in search of the kidnappers. The evil men manage to kill Langly and make it to the volcano and the treasure, but Bomba stops them cold and then it's a fight for survival as the volcano erupts.

This is a fast moving film that shouldn't disappoint any fan of this genre. I liked it, and the cast is very good as well. There are many more in the series and I hope I get a chance to see them soon. 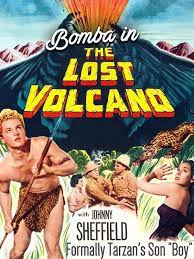