A man played by Luke Evans plots and eventually kidnaps a flower shop owner named Cathy (Kelly Reilly) and takes her to his home and imprisones her in a specially constructed 10X10 room.

It turns out that he has his reasons. He wants to know her real name and her real past.

Her secret is soon revealed. Turns out that she changed her name and everything after she was acquitted of killing three people in a hospital when she was a nurse. It also turns out that one of her victims was the mans wife.

What really surprised me about this film is that you actually side with the kidnapper when everything comes to light. The film was a disaster at the box office, and I attribute that to the rather bland way the entire movie was presented.

It's an allright film, but I think they should have spiced it up a bit with more exploitation elements, but that is just my opinion. If you get a chance and feel like watching it, check it out. 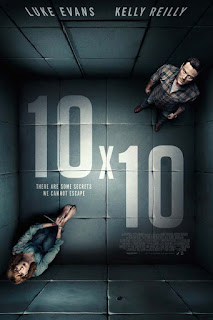 Posted by quatermass at Wednesday, September 18, 2019