A while back my roommate and I bought a DVD from Mill Creek entitled "Monster Movie Mix". It had interesting things on it, but the title is very deceptive.

The DVD cover has no title listings except to say 12 films of Alien Invasion and Deadly Attack. Well come to find out the DVD had three movies and then 9 TV episodes from such shows as "Lights Out", "Tales Of Tomorrow" and others. This one however really surprised me.

This is an episode from the TV series called "Thriller" hosted by Boris Karloff. I was not aware that any of these were in the Public Domain.

John Newland stars as Ellis Corbett, a man who inherits a mansion from his slightly insane uncle Amos Wilder (Terence de Marney). He is told that every day he must check the crypt to see if anyone or anything has tried to enter.

This is a very bizarre episode and also one of the better ones overall. It was a good look at what the rest of the series run would be like. August Derleth wrote the original story and Richard Matheson adapted it to the small screen.

This is a wonderful way to kill 50 minutes and if you're a fan of this show as I am you'll love it. Antoinette Bower and Reggie Nalder also star. 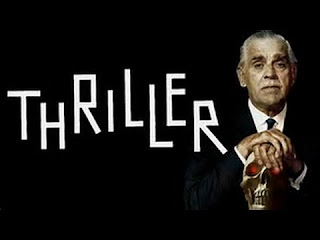 Posted by quatermass at Saturday, September 28, 2019