Scott is humbled by this experience and vows never to make that mistake again, and quits his job and starts drinking. His young assistant, Ellen Miles (Nina Foch) tries to help him get his life back on track.

Scott takes a job defending a lowly criminal and gets him off with some spectacular courtroom tactics which comes to the attention of a top crime boss named Frank Garland (Albert Dekker) who hires him immediately.

Soon Scott is making a very good living but his employer puts him at odds with his old friends and Ellen. Garland uses Scott for a lot of cases, but soon things get out of hand and Scott again sees the error of his ways.

During a big case Garland plans to have Scott killed in order to protect his crime empire. This leads to a most interesting climax. Robinson handles the lead role just perfectly, but what else would one expect from Robinson?

The story is captivating and the movie moves at a very quick pace with no let up until the final End title card. Some argue that this isn't a film noir, but it has all the key elements and I consider it to be one.

A great movie experience that every crime film fans should see. RECOMMENDED!! 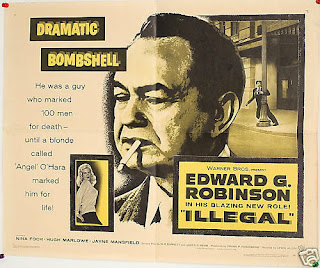 Posted by quatermass at Saturday, September 21, 2019