This is a new TV series that premiered on the Shudder Network on 9/26/19. I will be looking at each of these and giving you my reviews on them.

Each episode is about 46 minutes long, and the season opener proved to be a super scary time. The two episodes are "Gray Matter" which is based on the wonderfully gruesome Stephen King story and "House Of The Head"

"Gray Matter" is a story about a man who drinks beer and accidentally has one that is contaminated with a strange fungus. His son relates the story about his changing father to a friendly store owner played by Adrienne Barbeau while the police chief and doctor go to the house during a raging rain storm to investigate.

The boy relates how his father slowly changed into a slime covered thing that lives in a dark room in their home. The Sheriff and doctor discover oh so much more when they enter the house. I don't want to give away too much, but the ending is a great combination of 50's comic book horror and end of times. Series creator Greg Nicotero directed.

The second tale is "House Of The Head" a bizarre tale about a haunted doll house. A little girl has a doll house and the figures seem to move whenever she isn't around.

The child discovers that the doll house is being haunted by a head ripping severed head!! This tale was very well directed by John Harrison, and has some great moments in it as well.

The standout scene here concerns the severed head under a bed. It was a great "make me jump" moment.

This series looks very promising as it follows the original Creepshow blueprint. It has comic book captions, page turns, comic panels, and "The Creep" brings us the tales each week.

I rate the 1982 Creepshow as one of the ten best horror films ever made and this show is one of the best I have seen...and I haven't watched a TV series for over 15 years. I hope they continue because this premier episode was damn good fun. WATCH IT IF YOU GET THE CHANCE!! 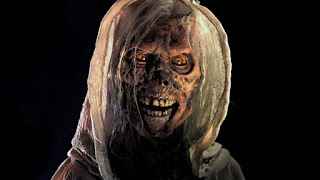 Posted by quatermass at Sunday, September 29, 2019