Ladd is fourth billed as Philip Raven, a hit man hired to kill someone and is then paid off in marked bills by a traitor named Willard Gates (Laird Cregar) who is secretly selling out the USA to the Japanese.

Raven begins to realize he has been duped and plots revenge against Gates. Along the way on a train he meets a lovely young singer named Ellen Graham (Veronica Lake) and slowly the twp begin to work together in stopping Gates.

While all this is going on, Lt. Crane (Robert Preston) who is also after Raven is asked by a Senate Committee to investigate Gates, and before you know it the chase is on.

There are plenty of very dark characters in this film including Ladd's Raven. When we are introduced to him we discover he only has only soft spot in his entire being and that is for cats. His hatred of the human race is very clear. Laird Cregar is excellent as the cowardly traitor, Gates, who has a very evil side to him.

Veronica Lake does a great job as Ellen, who perfectly fits with the Raven character. She has plenty of feelings for people and he does not, of course. They make a great team and would work again on other classic noir films such as "The Glass Key) and more.

The rest of the top notch cast includes Marc Lawrence, Tully Marshall, Olin Howland, Frank Ferguson and Victor Kilian in a small but pivotal role. This is what film, noir is all about and no fan of the genre should miss this film. It was released by Paramount but bought by Universal for release.

One of the best films of it's kind to ever be made. HIGHLY RECOMMENDED!! 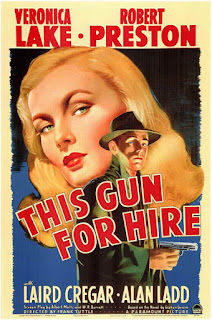