One of the darkest film noir movies ever made.

Tyrone Power stars as Stanton Carlisle a young man who works in a small circus but has aspirations of making the big time. While working at the circus he is curious but frightened by what is known as "The Geek", a bizarre attraction that bites the heads off of live chickens and Stan wonders how anyone could ever sink so low.

He works with a woman named Zeena (Joan Blondell) and when her husband dies Stan moves right in to save the act. However Stan has his eyes on a beautiful woman named Molly (Coleen Gray) who works as the "Electric Woman" in the carnival.

Eventually Stan learns the business good enough to move out on his own. He secretly marries Molly and heads for the big city, not heeding the warnings of Zeena and her Tarot cards that warn of nothing but doom.

Stanton becomes obsessed with power and money and eventually meets a young psychologist named Lilth Ritter (Helen Walker) and both team up to bilk a very rich man out of hundreds of thousands of dollars.

Stan's ploy collapses after Molly refuses to go along with the charade and Stanton is exposed as a fake. he goes to Lilith for help, but finds that she has pulled a double cross and kept all of his money and has called the police. Stanton send Molly out of town and looks for a way to hide from the authorities.

He finds himself homeless and friendless while traveling the country on trains talking to bums. He slowly becomes an alcoholic who'll do anything for a drink. He happens upon a small carnival and the owner gives him a job, but not the job Stanton wanted. He ends up as "The Geek" and has now realized how low a person can go and how they get there.

This is a very powerful film with one of the darkest endings I have ever seen. It is unforgettable. The rest of the cast includes Taylor Holmes, Mike Mazurki and Ian Keith. If you get a chance to see this gem, do so. You won't be disappointed. One of the best. 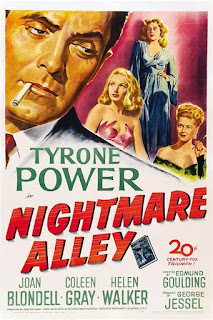 Posted by quatermass at Thursday, September 26, 2019