Simon MacCorkindale and Jane Wymark star as a young couple that move into a rundown farmhouse far away from all the insanity of the city so he can have a better job as a verterinarian.

While the house is being repaired, they discover a large jar inside a hollowed out wall. Inside the jar is the mummified remains of "something". Nobody seems able to identify it.

Wymark's character of Jo bwgins to fear for her unborn baby and is terrorified by strange noises and shadows in the house. Of course her husband refuses to believe her.

Soon it's too late and the story wraps up with a truely shocking ending. The actors do their part well, and the monster is never explained, but we see it in the final shot and it looks very creepy.

It seems Sinister Cinema is slowly making a lot of these available and I hope they continue. The show entitled "Beasts" is probably one of the best shows ever aired by the BBC.

This is a HIGHLY RECOMMENDED little feature that horror fans should love. 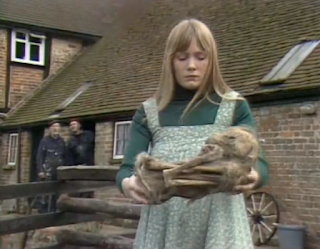