A solid murder mystery shot in England. It's also known as Street Of Shadows.

Luigi keeps his business honest even though the cops are always watching it. One day Luigi falls for a beautiful young woman named Barbara Gale (Kay Kendall) who is the neglected wife of a heavy gambler.

She agrees to divorce her husband and go away with Luigi, but before that can happen another young woman who is a friend of his is found stabbed to death in his apartment.

Luigi gets a friend of his named Limpy (Victor Maddern) to help him hide the body of Angelo Abbe (Simone Silva), but they are caught by the police. Luigi escapes and goes into hiding while trying to find out who the real killer is.

This is by no means an original story, but it does move along quickly and hold your attention. Romero is perfect for the role of the small time, but suave businessman.

The two women in the film are both stunning and had tragid lives. Simone Silva died of a stroke at the age of 29 in 1957 and beautiful Kay Kendall died of leukemia at the age of 33 in 1959. 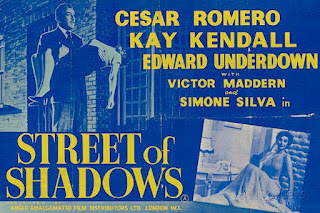