DAY OF THE NIGHTMARE 1965 (SINISTER CINEMA)

This one is a dandy.

Police detective Sgt. Dave Harmon (John Ireland) is called in to investigate a muder at an apartment complex. Witnesses heard a violent arguement between the man and woman who lived there and all that remains is a dog that was kicked to death.

Witnesses also say they saw a man hauling a trunk downstairs and into a car. Harmon believes this is the killer and he is trying to hide the body. There are some clues that lead Harmon to a painter named Jonathan Crane (Cliff Fields).

Jonathan works in LA and his wife Barbara (Beverly Bain) is always at home alone. When Jonathan is away a mysterious woman who many thought was dead is trying to kill Barbara.

We find out that Jon has some serious problems as he cannot have sex with a woman, but needs to be whipped, or to whip women. His father is a psychologist named Philip (john Hart) who has sex with most of his female clients.

What unfolds from here is truely bizarre. Jonathan has adopted a second personality in the form of a woman!! Yep, and it even gets more twisted. Yes this movie will remind you of "Psycho" and "Homicidal" but is does have a full story of it's own.

If you liked both aformentioned films I can't see why you wouldn't want to see this psycho-sickie. It's a peach, and I liked it a lot. 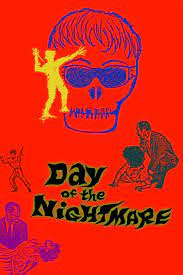