SANTO AND THE FURY OF THE KARATE EXPERTS 1982 (TUBI)

Absolutely one of the worst films I have ever seen.'

Made 2 years befor the great Santo passed away, this film is possibly the worst I have ever seen Santo star in.

This is a follow up to Fist Of Death, and man does it suck. It stars Rene Cardona amd it's obvious he didn't give them any pointers on how to make a good film. He just wanted his check.

Santo gets caught once again in the war between two sisters in the Far East, which is actually south Florida. The good queen and bad queen are played by the same actress, Grace Renat.

Her dual role calls for nothing but being nice in one rola and dancing around in the evil role. Her hugely inflated breasts act like more of a distraction thatn anything else.

This film has it all...bad fight scenes, day and night shots all mixed up, bad dubbing, bad acting and NO directing. What a disaster. Silicone breasts do not a good film make. My wife said we should retitle the film "Santo In Silicone Valley".

Avoid this crap at all costs and save yourself from wasting 87 minutes of your life. I can't get it back, but I have saved you the problem. 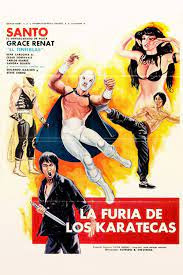