A very well made Finnish/Soviet production.

This is a stunning print and subtitled in English. The story revolves around a young man who sets out to save his small village from an evil queen that has stolen the Sampo...a magical stone that creates sale, bread and many other things the village needs.

The evil queen then decides to kidnap the fair maiden that the young man wants to marry. After He rescues his love he loses the Sampo in the ocean and is almost killed by the queen and her evil minions.

The evil one is furious about losing the Sampo so she kidnaps the Sun and the Earth beings to freeze. The young man enlists his entire village to rise up against the Queen and free the sun, which they do.

This movie was cut by 23 minutes and dubbed into english by AIP then released as "Day The Earth Froze" in 1964. When I was very young I saw this and was bored stiff, but now all these years later I can appreciate the beauty of the story.

To be fair however, I saw the AIP version which is nowhere near as good as the original.

I highly recommend this film which Sinister turned out in 2021 and I am just now getting to the review. Check it out, you won't be disappointed. 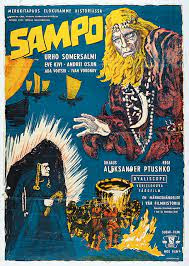