This is a fun Santo film.

Santo is called on to help a professor and his gorgeous niece find a treasure that will then be donated to a childrens charity. Our hero agrees and asks for help from Mantequilla, a friend and boxer who is also in Mexico.

A clue to the treasure is a medallion worn by a mummy of being known as The Crying Woman". They take the medallion and no sooner than they do, the mummy comes back to life. It starts killing the relatives of the man who was married to her 300 years ago.

To make matters worse a group of gangsters led by Servero Segovia (Rene Cardona) are after the treasure as well. Santo and friends learn that the killings will continue until the treasure is given to charity. That is the only thing that will stop the mummy from seeking revenge.

There is much to be said about this film. The mummy is creepy looking and the flashback into why the Crying Woman is seeking revenge is very interesting and told with great flair.

The film moves at a great pace, and all of the women are attractive and easy to look at, which is usually the case in Santo films. Rene Cardona directed hundreds of Mexican films including tons of horror, but this time he takes an acting role, in which he is very good.

The banter between Mantequilla and Santo is classic, and the dubbing works most of the time. The rest of the cast includes Alonso Castano, Ana Lilia Tovar, Sonia Cavazos and Marcia Montes.

I had never heard of this film and when I saw it on my "recommendations" from Tubi, I knew I had to watch it. Good fun and highly recommended. 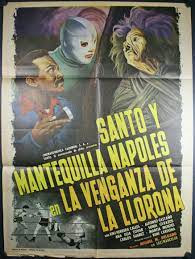