One of the strangest Santo films I have ever seen, and that's something!!

Tubi has a slew of Santo films for your streaming pleasure and I intend on watching everyone. This little diddie was filmed in Florida 2 years before Santo passed away.

The story revolves around a tribe of people in the Far East who worship a star of great power that actually heals people and brings the people peace and happiness. The tribe is ruled over by a beautiful queen. I think her breasts are some of the largest I have ever seen in a mainstream movies...but let us move on.

The good Queen's evil twin sister, the same actress, plots to steal the star and use if for her own evil purposes. She manages to do just that and then it's up to Santo to come to the rescue.

There are many bizarre sequences in this film, and the winner goes to the scene where the evil queen is dancing in front of a fire and changes into a cobra, a tiger and a lumpy faced hairy monster!!

Santo has some physical fights in this film, but you can tell he's getting up in years and has to take it a bit easy. You gotta see this once in a lifetime extravaganza into the bizarre extremes of Mexican cinema.

The print os very nice and it has new English dubbing that for the most part works well. Santo fans a breast fans should enjoy this. 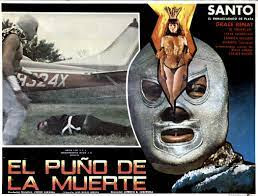