A well made Mexican horror film gets a beautiful Blu-ray treatment.

VCI has released this is a Spanish language, English subtitled version.

The story revolves around a woman who summons a priest to her home for the last rites. Before he cam start she insists on giving him an Escapulario, which she claims has special powers to bring the believer good luck.

The priest is skeptical, but listens to the woman as she tells two tales of her sons. Set during the Mexican Revolution one tale tells how one of her sons stopped believeing in the amulet and met a very bad end.

The other talks about her other son who always has faith and now is still living and doing very well. Both tales are very good and have some very subtle shocks and some scenes you'll never forget.

This movie is almost forgotten which is sad because it's so well made. In fact, it's so well made that that may be the reason it's forgotten. What I mean is that Mexican cinema was so full of wrestling, monsters and sexy women that when those point were not included, it actually did effect the films in some way.

However, check out this fine release if you want to see a very well made horror takle that can still shock you today. HIGHLY RECOMMENDED!! 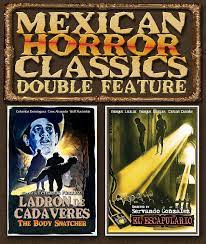