I guess everyone had seen this but me. I stumbled on this at 3AM one morning and was pleasently surprised.

The premise for this film is very good in my opinion.

A computer hacker named Josh (Jonathan Tucker) hacks into a strange wireless signal and then finds himself stalked by creatures that eventually cause his disappearance.

His girlfriend Mattie (Kristen Bell) investigates and goes to his apartment which is full of garbage and she finds his dead body, which tries to attack her. Things start to get really weird as a group of Mattie's friends begin to get mysterious messages from Josh over the internet.

It become apparent that they are all indanger from bizarre creatures which seem to live inside the internet. One by one each is killed until only Mattie and her beautiful roommate Isabelle (Christina Milian) are left. They hear on the news that people are disappearing all over the world at an alarming rate.

Mattie tracks down Josh's old computer and the man who took it. Together they discover that there is an entire other world made up of dead people who are trying to get back into this world vis wireless communication devices. And it is worldwide now that it has been unleashed.

There are some very effective scares in this film including the scene where Isabelle is alone in the laundry room and something is in a dryer!! A great scene indeed.

Mattie and the man named Dexter (Ian Somerhandler) discover a virus they have to use in order to stop the worldwide problem, but will it work?

I have not told a whole lot about this film because I believe I'd spoil it for anyone who hasn't seen it. This is an American version of the Japanese film entitled Kairo from 2001. During about a 5 year perios deom 2002 until 2007 a lot of Hollywood horror films were being based on Japanese horror. Some were good, some were not, but this is one of the good ones.

I highly recommend this to horror fans, and it's not hard to see. It's available everywhere and if you want a good scare, check it out. 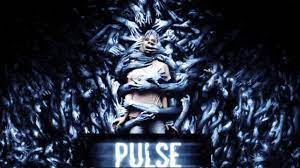