A very interesting episode of the TV show Fireside Theater.

Margaret Field stars as a young woman who moves into a new apartment. She is an actress and currently dating a married executive in the movie business.

After the unlocks her door and settles down she notices a woman sitting at her living room table playing Solitaire. She is shocked and tells the woman to leave, upon which she replies she cannot leave.

The young woman begins to doubt her own sanity as the card playing woman refuses to explain why she, soon to be "they" cannot leave. After a lot of digging for information she discovers that the other woman was the wife of the man the young woman is now dating.

The card playing woman explains that she killed herself out of grief and then is dawns on the young woman, what is really happening. It's a neat little twist a lot of us have seen in other productions, but back in 1951 it was still a new concept.

The show runs 26 minutes and if you're a fan of long forgotten TV shows, this will be a real treat. I found it difficult to find any information on this. 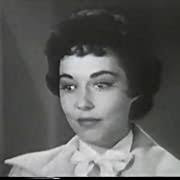