One of the oldest living entertainers has passed away.

In his 45 year acting career Persoff appeared in almost every program I ever watched, and tons of movies as well.

He began his acting career in 1948 on an episode of "The Naked City". His genre credits include such TV shows as "Suspense", "I Spy", "The Twilight Zone", "Alfred Hitchcock Presents", "Thriller", "Voyage To The Bottom Of The Sea", Wild Wild West", "Tarzan" and hundreds more.

I also enjoyed him in such shows as "Gilligan's Island", "Naked City", "The High Chaparrel", "Ellery Queen" and many others. He seemed to always be working.

Some of his film credits include "The Stranger Within", "Fate Is The Hunter", "Day Of The Outlaw" and "Al Capone" among others. His waork was always good and he could play just about any role.

Persoff was born in Jerusalem in 1919 and passed away in California on April 5th at the age of 102. A legendary talent and a very gifted man who lived a good long life and had a great career. 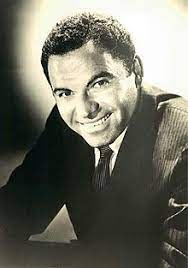