This is a fun little film from South of the border.

The wrestling hero Blue Demon stars in this epic about a man who is passing himself off as the Demon in order to steal jewels and murder people.

A police inspector, Ponce (Armando Silvestre) is put on the case, but he simply cannot believe that the Blue Demon has turned bad and become a murderer.

Blue Demon fights to prove his innocence and finally comes face to face with his imposter. After a good fight in an old warehouse Demon defeats him and then has a final wrestling match with a very skilled opponent.

This opponent turns out to be a former wrestler who has a grudge against Blue Demon. He is unmasked in the ring and the police arrest the real criminal.

This is a well paced little film that should hold your attention. As is usual, the women are all very beautiful. The was directed by Rene Cardona who directed about 146 films during his career.

The new dubbing is bth good and bad, and I love the wrestling announcer during the matches. It's a hoot. This is currently streaming on TUBI and I recommend you see it and enjoy some non-thinking entertainment. 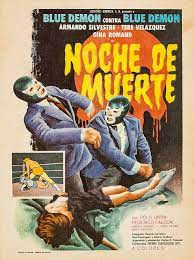